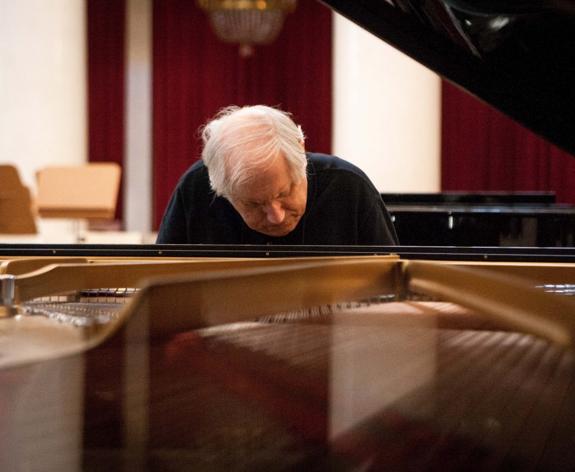 Knowledge of the expressive beauty and compelling honesty of Grigory Sokolov's work requires an understanding of the unique, unrepeatable character of music created in the present moment. The Russian pianist's lyrical interpretations, which come to life in concert with mystical intensity, stem from a deep understanding of the pieces in his wide repertoire. From transcriptions of medieval sacred polyphony and keyboard works by Byrd, Couperin, Rameau, and Froberger to Bach, Beethoven, Schubert, Schumann, Chopin, Brahms, and landmark twentieth-century compositions by Prokofiev, Ravel, Scriabin, Rachmaninoff, Schoenberg, and Stravinsky, his recital programs cover it all. He is generally regarded as one of the finest pianists of our time, an artist internationally appreciated for his profound insight, captivating spontaneity, and unwavering commitment to music.

Grigory Sokolov was born on April 18, 1950, in Leningrad (now St Petersburg). He began playing the piano at the age of five and began studying with Liya Zelikhman at the Leningrad Conservatory's Central Special School two years later. He went on to study under Moisey Khalfin at the Leningrad Conservatory, where he gave his first performance in 1962. Sokolov's extraordinary skill was recognized in 1966, when he received the Gold Medal at the International Tchaikovsky Piano Competition in Moscow at the age of 16. Sokolov's piece was later championed by Emil Gilels, head of the Tchaikovsky Competition jury.

In the 1970s, Grigory Sokolov embarked on large concert tours to the United States and Japan, but his creativity developed and grew away from the limelight. His live recordings from the Soviet era have taken on a near-mythical reputation in the West, demonstrating a performer who is both completely unique and nurtured by the rich soil of the Russian piano heritage. After the Soviet Union fell apart, Sokolov started to perform in Europe's most prestigious music halls and festivals. Before deciding to focus solely on solo recitals, he performed extensively as a concerto soloist with orchestras of the highest caliber, including the New York Philharmonic, the Royal Concertgebouw Orchestra Amsterdam, the Philharmonia London, the Symphonieorchester des Bayerischen Rundfunks, and the Munich Philharmonic. Each season, Sokolov plays approximately 70 performances, focusing entirely on a single program and traveling widely across Europe. 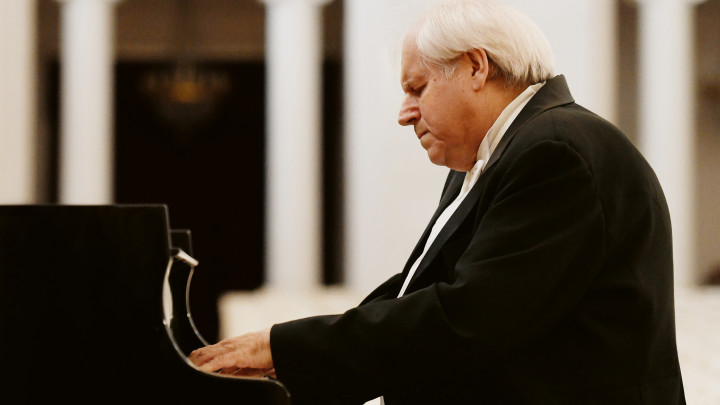 Grigory Sokolov is only concerned with music created at the current moment, which is original and unrepeatable. He has little interest in producing studio recordings, performing with orchestras, or chamber music; instead, he spends months engaged in his recital program, which he plays across Europe on lengthy tours. The Russian pianist's lyrical interpretations, which are imbued with mystical intensity and enthralling honesty, are the result of his deep understanding of a wide repertoire. Sokolov's repertoire includes transcriptions of medieval sacred polyphony and keyboard works by Byrd, Couperin, Rameau, and Froberger, as well as music by Bach, Mozart, Beethoven, Schubert, Schumann, Chopin, and Brahms, as well as major twentieth-century works by Prokofiev, Ravel, Scriabin, Rachmaninov, Schoenberg, and Stravinsky. He is generally regarded as today's best pianist among pianophiles, an artist globally appreciated for his visionary inventiveness, mesmerizing spontaneity, and unwavering commitment to music.

The empathy and compassion communicated by Sokolov's art are mirrored in critical praise and audience ovations, not least in reviews that refer to him as a "genius" and "living legend." "Many people believe that, following the deaths of musicians like Arturo Benedetti Michelangeli, Glenn Gould, and Emil Gilels, Sokolov is now the greatest living pianist," observed Bruno Monsaingeon, an award-winning documentary filmmaker who captured the essence of Sokolov's artistry on camera in a recital at the Théâtre des Champs-Elysées in Paris in 2002.

In 2014, Sokolov secured a deal with Deutsche Grammophon that gave him sole rights to his music. The pianist's position among the really great artists of our time has been solidified as a result of the connection, which has been warmly received by a new and passionate audience. Sokolov's first new CD in almost two decades, a spectacular performance recorded live at the 2008 Salzburg Festival, was published in January 2015 on the Yellow Label. Two Mozart sonatas, Chopin's 24 Préludes Op.28, and encore pieces by J.S. Bach, Chopin, Rameau, and Scriabin round out the double-disc collection, which exemplifies the artist's wide-ranging repertory. In January 2016, Sokolov's Salzburg Recital CD was followed by Sokolov: Schubert/Beethoven, a second two-disc collection. The latter includes encores by Rameau and Brahms, as well as Schubert's Four Impromptus D899 and Three Piano Pieces D946, which were recorded live at the Warsaw Philharmonie in 2013, and Beethoven's Piano Sonata No.29 "Hammerklavier," which was recorded live at the 2013 Salzburg Festival.

Sokolov's third DG CD, issued in March 2017, included his particular favorites: Mozart's Piano Concerto in A major K488 and Rachmaninov's Piano Concerto No.3, the former recorded during the Salzburg Mozart Week in 2005 and the latter at the BBC Proms in 1995. The DVD of Nadia Zhdanova's documentary film A Conversation That Never Was, a fascinating picture of Sokolov based on interviews with the pianist's friends and colleagues and supplemented with previously unheard material from private archives, was released together with these historic archival recordings.

A double CD of live recordings from three recitals delivered in the summer of 2019 is his most recent release. It includes Brahms' Piano Pieces, Op. 118 and 119, as well as encores by Brahms, Debussy, Rameau, Rachmaninov, and Schubert, in addition to Beethoven's Sonata No. 3 and Bagatelles, Op. 119. The CD comes with a DVD of a performance shot in Turin in 2017, including Mozart's "Sonata facile" K545 and Sonata in C minor K457, Beethoven's Sonatas Nos. 27 and 32, and encores by Chopin, Debussy, and Schumann, among others. Sokolov will be 70 on April 18, 2020, and the record will be published on April 17 in Austria, Germany, and Switzerland, and May 8 elsewhere.

Grigory Sokolov was born on April 18, 1950, in Leningrad, Russia (now St. Petersburg). He began studying piano at the Central Special School of the Leningrad Conservatory at the age of five, and two years later began lessons with Liya Zelikhman. He moved on to the Leningrad Conservatory to study under Moisey Khalfin and gave his first performance there in 1962. In 1965, Sokolov's extraordinary ability was recognized when he earned first place in the Russian National Competition. The following year, he made international headlines when, at the age of 16, he won the coveted Gold Medal at the International Tchaikovsky Competition in Moscow, becoming the youngest musician ever to do so. Sokolov's piece was later championed by Emil Gilels, head of the Tchaikovsky Competition jury.

In the 1970s, Grigory Sokolov went on big concert tours to the United States and Japan, but his creativity developed and grew away from the limelight. In the West, his live recordings from the Soviet era have taken on a near-mythical reputation, demonstrating a musician who is both completely unique and nurtured by the rich soil of his Russian piano playing heritage. Sokolov started to perform in the world's most prestigious music halls and festivals when the Soviet Union collapsed. Before deciding to focus solely on giving solo recitals, he performed extensively as a concerto soloist with orchestras of the highest caliber, including the New York Philharmonic, the Royal Concertgebouw Orchestra Amsterdam, the Philharmonia London, the Symphonieorchester des Bayerischen Rundfunks, and the Munich Philharmonic. Each season, Sokolov plays approximately 70 performances, focusing on a single program and traveling extensively across continental Europe. Mozart's Prelude and Fugue, K394, Sonata in A, K331 and Rondo in A minor, K511, as well as Schumann's Bunte Blätter, op. 99, are among his current repertoire.

Sokolov, unlike many other pianists, is fascinated with the mechanics and setup of the instruments he plays. To meet his ideal criteria, he spends hours researching their physical features, talking with piano experts, and working with them. "Learning the piano takes hours since each one has their own personality and we play together," he says. Sokolov's musical ideas flow best when he and his instrument work together. Through the sheer brilliance of his finger-work, he creates everything from the subtlest tone and textural gradations to the loudest sonic contrasts. His remarkable ability to articulate individual voices within a complex polyphonic tapestry and present smooth melodic lines has been praised by critics on many occasions.

Grigory Sokolov's captivating talent has the ability to develop the focus required for listeners to consider even the most well-known pieces from new angles. In recital, he pulls listeners into a personal connection with the music, going beyond mere showmanship and surface presentation to offer deeper spiritual significance. Sokolov's work is built on the strong foundations of his one-of-a-kind personality and unique vision. Many of the traditions associated with a contemporary musical career, including those involving media and public relations, he considers to be diversions from the most important aspects of learning and creating music. Sokolov "stunned his audience with a sort of pianism, musicality, and creativity one believed had gone forever," according to a review in the San Francisco Chronicle. 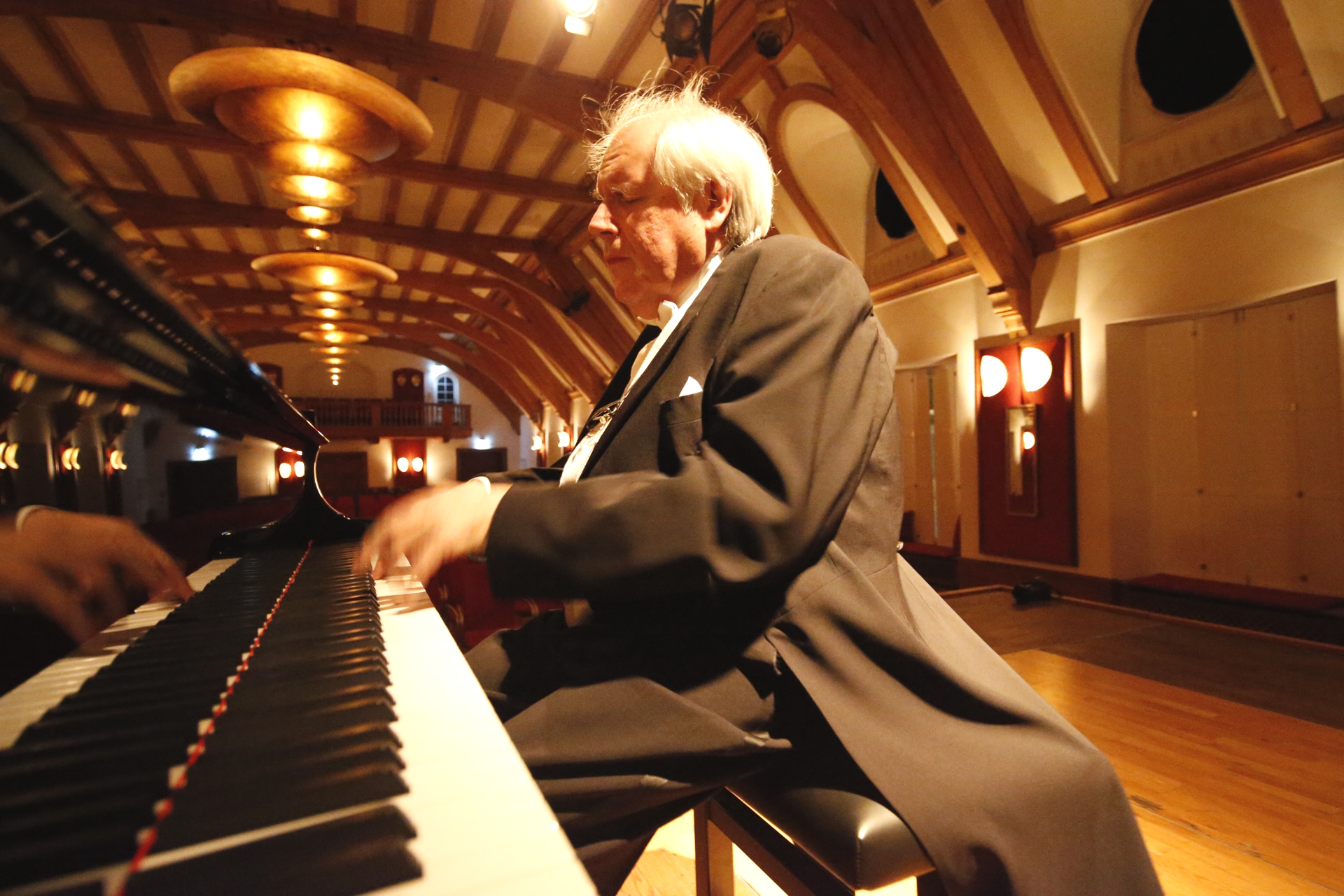 Sokolov canceled a performance in London in March 2009 due to British immigration restrictions requiring all non-EU employees to submit fingerprints and eye prints with every visa application (he also cancelled his 2008 concert on seemingly similar grounds). Sokolov objected, claiming that such demands echoed Soviet tyranny.

Sokolov declined to accept the Cremona Music Honor 2015 after British music critic Norman Lebrecht won the award in 2014. He said on his website, "According to my views about basic decency, it is a disgrace to be on the same award-winners list as Lebrecht." Sokolov's comments seemed to be in response to Lebrecht's personal insults regarding Sokolov's family.

Sokolov credited the following pianists with inspiring him throughout his studies: "Emil Gilels is the first person I'd like to mention among those I heard on stage. It was Rachmaninoff, Sofronitsky, Glenn Gould, and Solomon Lipatti, according to the archives. In terms of aesthetics, I'm primarily influenced by Anton Rubinstein. "