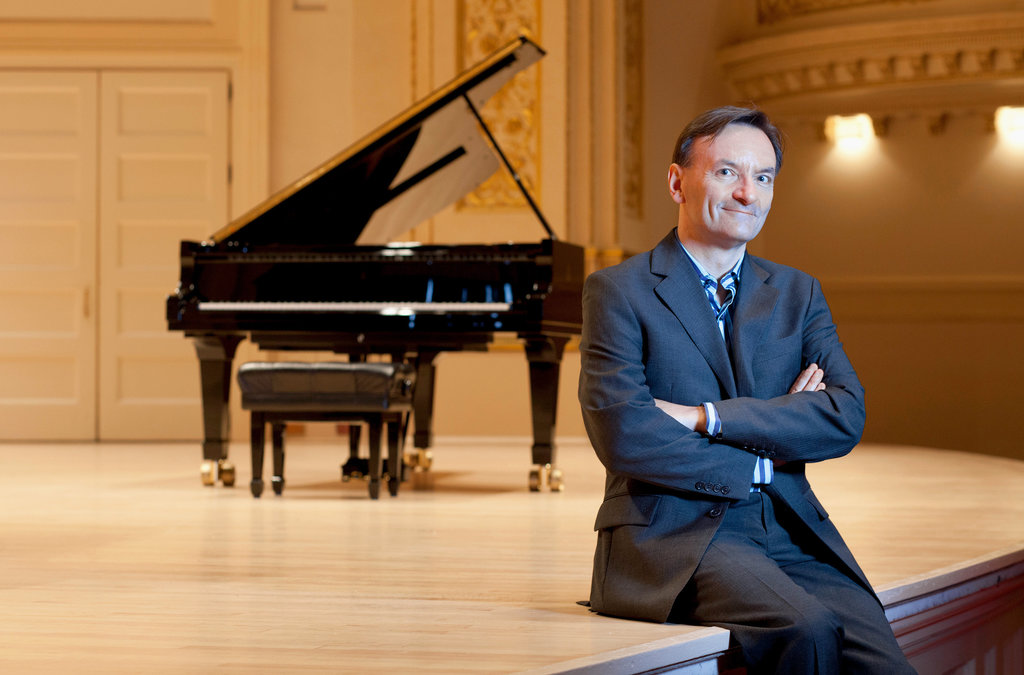 Hough grew up in Thelwall, where he started piano lessons at the age of five and was born in Heswall (then in Cheshire) on the Wirral Peninsula. Before his death at the age of 54, his father, who was born in Australia, worked as a technical representative for British Steel. Hough was able to memorize approximately 100 nursery rhymes at a young age, and after much begging, his parents agreed to purchase a second-hand piano for the house for £5 from a nearby antique store. He had a "mini-nervous breakdown" when he was 12 years old, which was prompted by a mugging event and resulted in his missing nearly a year of school. He attended Chetham's School of Music and the Royal Northern College of Music, which he subsequently characterized as "not a great institution when I was there." He was a finalist and winner of the piano division of the BBC Young Musician of the Year Competition in 1978. He received the Terence Judd Award in England in 1982. In New York City, he won first place in the Naumburg International Piano Competition in 1983.

Hough earned his master's degree at the Juilliard School, where he was awarded the first-ever Royal Philharmonic Society Julius Isserlis Scholarship for study abroad. Heather Slade-Lipkin, Gordon Green, and Derrick Wyndham have all taught him. He is a well-known soloist who is also a composer and transcriber, and he often performs his own compositions at recitals. He has almost 30 published works to his credit. In March 2007, he gave the world premiere of his cello concerto, written for Steven Isserlis, and in the summer of the same year, Westminster Abbey and Westminster Cathedral played masses he composed for them. In 2009, musicians of the Berlin Philharmonic performed his trio for piccolo, contrabassoon, and piano ('Was mit dem Traenen geschieht') at the Philharmonie in Berlin. Members of The Prince Consort debuted his song cycles 'Herbstlieder' (2007), 'Other Love Songs' (2010), and 'Dappled Things' (2016).

In 2011, he debuted his 'Sonata for Piano (Broken Branches)' at Wigmore Hall. The orchestrated version of his Missa Mirabilis made its global debut in 2012 with the Indianapolis Symphony Orchestra and Symphonic Choir. The Colorado Symphony and Andrew Litton recorded this piece for Hyperion Records in 2015. He has composed four solo piano sonatas. Rough Ideas, his collection of essays, received the Royal Philharmonic Society Award for Storytelling in 2020.

In 2001, he became the first classical musician to get a MacArthur Fellowship, joining a list of notable authors and scientists who have made important contributions to their professions. He was designated one of twenty living polymaths by The Economist and Intelligent Life magazines in 2009. At the renowned Royal Philharmonic Society Music Awards in 2010, he was awarded Instrumentalist of the Year. He was a member of the Royal Ballet Companies' Board of Governors (The Royal Ballet, Birmingham Royal Ballet and the Royal Ballet School). He is a supporter of The Nightingale Project, a nonprofit that brings music and art into hospitals, as well as Music in Prisons (Irene Taylor Trust). In the 2014 New Year Honours, he was named a Commander of the Order of the British Empire (CBE) for services to music. In 2017, he was appointed as an Honorary Bencher of the Middle Temple. In 2018, he was inducted by the Royal Philharmonic Society as an honorary member. He will be a three-year Visiting Fellow at Lady Margaret Hall, University of Oxford, beginning in 2019.

In October 2012, he held a solo show of his paintings at the Broadbent Gallery in London.

Hough was a guest on BBC Radio 4's Desert Island Discs in October 2016. Chopin's Prélude No. 17 in A-flat, Rachmaninoff's recording of Kreisler's "Liebesleid," Led Zeppelin's "Stairway to Heaven," Bach's "Kyrie eleison" from the Mass in B minor, Berg's "Lyric Suite for String Quartet" (3rd movement), Stephen Hough's "Sonata for cello and piano left hand ("Les "Proficiscere, anima Christiana His luxury item was a panama hat, and his book was a multilingual version of Proust's La Recherche du temps perdu. He requested a copy of the Tyndale Bible in particular.

He has almost 60 CDs to his credit, the most noteworthy of which being a collection of the four Rachmaninoff piano concertos and the Rhapsody on a Theme of Paganini, recorded live with the Dallas Symphony Orchestra under the direction of then-music director Andrew Litton and compared to the composer's own recordings. He received his sixth Gramophone Award as well as the Classical BRIT Critics Award for his recordings.

In 2001, his recording of the five Saint-Saens concertos received the Gramophone Record of the Year award, and in a poll celebrating the award's 30th anniversary, it was chosen as the Gold Disc, "winner of winners."

In 2011, his recording of Chopin's Complete Waltzes received the Diapason d'Or de l'Année.

He is also renowned for promoting lesser-known composers like Johann Nepomuk Hummel, Xaver Scharwenka, York Bowen, and Federico Mompou, who are usually regarded as being outside the mainstream canon.

His own works may be heard on the BIS Records CD Broken Branches, as well as the Prince Consort's Linn Records CD Other Love Songs. On his CD In The Night, he performs his second Piano Sonata (notturno luminoso), and his cello sonata is featured on a performance disc with Steven Isserlis. Andrew Litton conducted the Colorado Symphony Orchestra in recording his Missa Mirabilis. Harry Christophers and The Sixteen recorded his sequence 'Hallowed' for unaccompanied choir on their CD 'Star of Heaven.' Yo-Yo Ma recorded two of his transcriptions on his CD, Song of Comfort and Hope, with Kathryn Stott. The title tune of his 2021 album Vida Breve is his 4th piano sonata.

In July 2017, Pentatone-Oxingale Records produced a CD for the Tippet Rise Festival's first opening, which included performances by Hough, Christopher O'Riley, and Matt Haimovitz, among others.

He holds the International Chair of Piano Studies at the Royal Northern College of Music in Manchester and is a visiting professor of piano at the Royal Academy of Music in London. He is also a member of the Juilliard School's faculty in New York.

Hough became a Roman Catholic when he was 19 years old. He contemplated becoming a priest twice in his life, most notably in the Franciscan Order.

He's written about his homosexuality and how it affects his music as well as his faith.

He maintained a life of celibacy for 15 years, following his Catholic vocation. He released The Bible as Prayer: A Handbook for Lectio Divina in 2007. In 2014, he released 'Nosing Around,' a little book on perfume. His debut book, 'The Final Retreat,' was released by Sylph Editions in 2018, and it examines the inner world of a priest struggling with sex addiction and religious sorrow. ‘Rough Ideas: Thoughts on music and more' is a collection of essays and short musings released by Faber & Faber in 2019 and Farrar, Straus and Giroux in 2020.

He was the winner of the Sixth International Poetry Competition in 2008. For five years, from 2010 to 2015, Hough maintained a blog on The Daily Telegraph's website.

In 1926, Hough's father was born in Mayfield, a suburb of Newcastle, New South Wales, as an only child. His mother moved him to England before his first birthday, living in the north, and leaving her husband behind in Australia. The kid was always informed that his father had died, although his father really lived another 30 years in Newcastle, working in the steel industry. Hough's grandfather sent letters to Hough's father, but he never got them.

Stephen Hough credits his decision to become an Australian citizen in part to his father, who yearned to return to his homeland but was never able to do so before his death in 1980 at the age of 54.